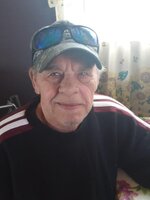 Robert was born in Herbert, SK to Peter and Agatha Ginther on January 21, 1951. He went to school at Thornton School in Saskatoon and went on to earn a degree/certificate in Carpentry as well as completing the Construction Safety and Administration Program.

Bob worked hard as a Jack of all trades doing many jobs and there’s not much he wouldn’t do if someone were to ask him for a hand. He spent a lot of time tinkering on vehicles, he enjoyed fishing, bonfires, barbeques and spending time with his family. He enjoyed going to Wendy’s restaurant and getting frosty’s and sitting on 8th street and watch the cars. He also like grabbing a timmies and sitting down by the river in the evening. Bob loved to travel, and enjoyed road trips across the provinces.

Bob is survived by his children, Rhonda (Wayne Vogelgesang), Marsha (Reynold) Lavallie, Andrea (Jason) Hunt and 12 grandchildren. Also his brother Norm and sisters Eva, Kathy, Eunice and Rose and numerous nieces and nephews. Bob was predeceased by his wife Diana, parents Peter and Agatha, brothers Len and Pete and sister Elma. In lieu of flowers, memorial donations may be made to a Charity of one’s choice.