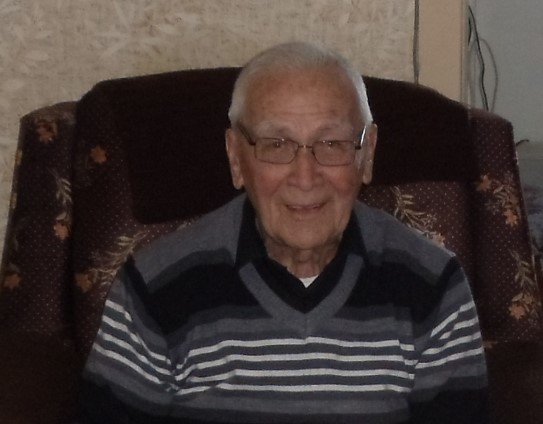 It is with great sadness that the family announces the sudden passing of Robert “Bob” Van Impe on Friday November 16, 2018.  Although Bob has passed away, his memory will live on through his children: Gary (Marion), Linda and Susan; and his grandchildren Joel, Meghan and Kevin Van Impe and Tyler Van Impe-Selinger all of Saskatoon.

Also left to mourn is his sister, Marie Sebestyen of Anglin Lake, and many nieces and nephews.  Bob was predeceased by his wife of 60 years, Ena (Crowe) Van Impe in 2002; and his brother Frank in 1979.

His parents John and Celestine Van Impe and his older brother Frank immigrated to Canada from Belgium in the early 1900’s.   Bob was a first generation Canadian, born in his parent’s house on Avenue Q and lived in the Pleasant Hill neighborhood his entire life, dying at the age of 96 in his Avenue M home.

He enlisted in the RCAF in WW2 and was stationed in Whitehorse where he liked to tell his grandkids that he kept the Japanese from invading Canada.  His only bad conduct during his service was when he went briefly AWOL to return to Saskatoon to marry Ena in July 1942.

A committed volunteer, Bob had a long-standing association with the sport of softball in Saskatoon, Saskatchewan, Canada and the world. After playing recreational ball during World War II with the RCAF, he moved on to the administration side and organized the Baldwin Hotel team in the Saskatoon Amateur Softball League.  He became the first commissioner of the Saskatoon Senior Men’s Softball League in 1965 and commissioner of the Saskatchewan Amateur Softball Association in 1966.

Bob retired in 1987 after a long career with Labatts both as a brewer and union supporter where he was active in union negotiations.  After retiring from Labatts and Softball Canada, remained active in the community volunteering at Hilltop games and playing golf and curling with “the boys” until well in his 90s.  He was a proud spectator at all of his grandkid’s hockey, curling, baseball and wrestling activities, giving comments and advice from the sidelines.

Our family wants to extend a special thank you to all the people who shared in Bob’s life, especially the Saturday morning breakfast crowd.  In lieu of flowers, please consider a donation to the SPCA or the Friends of the Bowl.

Share Your Memory of
Robert 'Bob'
Upload Your Memory View All Memories
Be the first to upload a memory!
Share A Memory