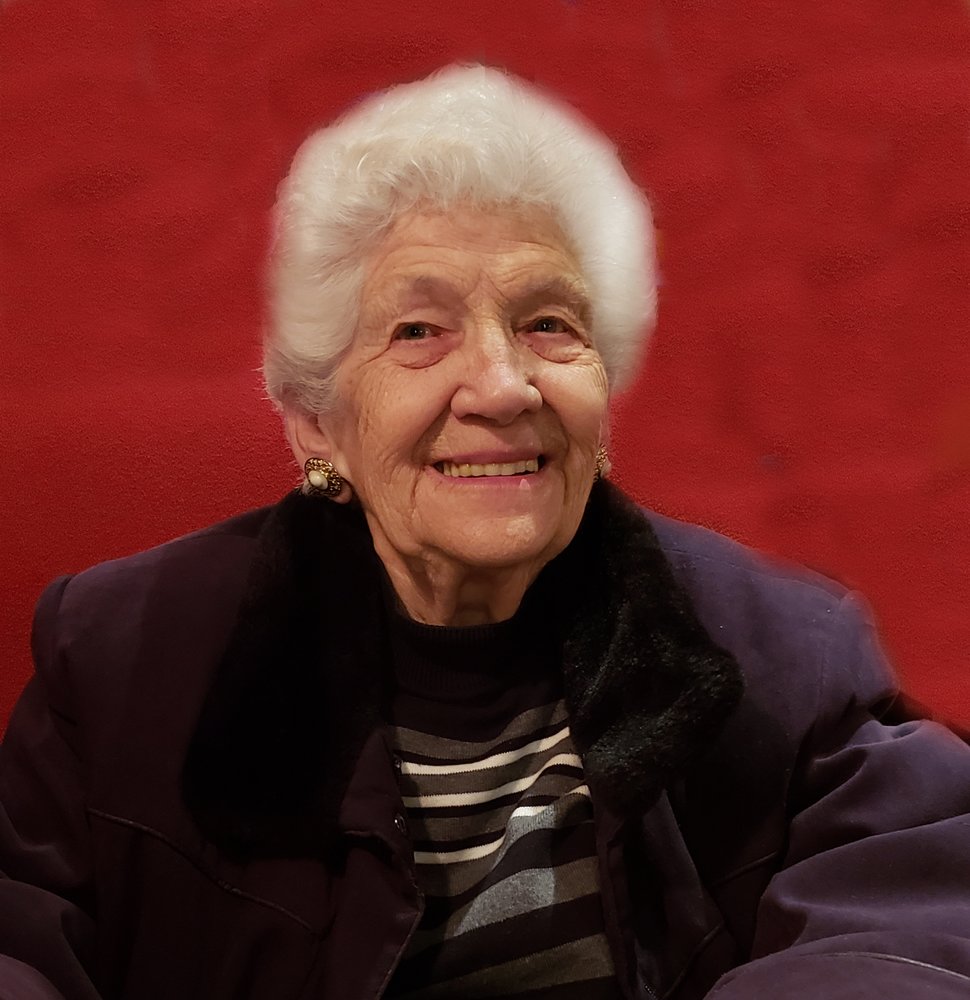 Doreen Bennett was born August 17, 1927 in Hardisty, Alberta.  Her dad worked for the Canadian Pacific Railways as a Station Agent.  The family moved to Broadacres, Saskatchewan soon after she was born.  When her father passed away suddenly in 1931 her mother Grace decided to move the family to Kerrobert, SK. as she believed she could support herself and two young daughters by operating a boarding house.  Doreen’s mother knew it would not be easy but she was up to the challenge.  Doreen attended elementary school, grades one through eight at Kerrobert School and was blessed with many inspiring teachers.  Her favourites were Miss Mamie Rodney, Miss O. Drake and Mr. Lester Bates.  When her older sister graduated from grade twelve she became employed with Sask Telephones.  After working a few years she applied for a transfer to Saskatoon.  Grace was able to get work in Saskatoon as a secretary and so they all moved to Saskatoon on September 1941.  To afford the move both my sister and my mother had to have an income.  To rent the house with four bedrooms in Kerrobert my mother paid only $8.00 a month.  In Saskatoon a one bedroom apartment cost $37.00 a month.  Housing prices in Saskatoon were much higher than in rural communities.  Also, this was the during the war years and all families had to cut back.  Many items were rationed and luxuries were few but Mom always managed to pay the rent.

In 1945, Doreen Bennett met Earl Braithwaite now home after his RCAF training.  During their courtship they loved to skate, take long walks and go on trips with friends to Waskesui.  There were married in June 1950.

The honeymoon was a wonderful trip to Banff.  They did not own a car so they took our bikes on the train to explore Banff and area.  In Calgary they had to change trains so they planned a quick visit with their aunts and uncles.  When they arrived in Banff they soon realized that Earl had made a reservation at a hotel that was hard to get to by bike.  The owner was very understanding and he refunded the deposit.  They ended up staying at the Mount Royal Hotel downtown which had a long history in Banff and is still operating today.  Later they visited with Effie and John Savages, another Saskatoon couple who were married seven days earlier. The next day Earl and Doreen got on their bikes and went for a swim at the Hot Springs.  There they met a nice couple from Edmonton.  They had a car and invited us out for supper.  Earl and Doreen really enjoyed their company and decided to go hiking with them the following day.  They also met Audrey and Ben Shelly who were married in Saskatoon the same day we were and had a fun visit.  Their honeymoon went by so fast so they got back on the train to travel to Calgary with their bikes.  They stayed a couple of days in Calgary visiting with my Aunt Edith and Uncle Reg Bessel.  We enjoyed riding our bikes around 1220 12th Street where their relatives had recently purchased their lovely new home.

After returning to Saskatoon on the CPR train their new life together began.  Right away Earl began building their first home at 1130 Avenue K. South. On day one, Earl had the basement dug.  Then concrete was poured for the foundation and basement walls.  Earl was the first customer for this new concrete company.  Earl, his father and good friends Norville Wright and Jim Morrell worked very hard and long hours getting the basement completed.  The plan was to build the basement and then the main floor walls and roof.  Earl worked all hours to finish the basement as quickly as possible so we   could live in it that fall.  Construction would then continue with building the upstairs main floor interior in the spring.

Grace stayed with a friend, Mrs. Keddy so Earl and Doreen could stay at the #32 Coronation Court apartment during the first period of construction.  Doreen was working at Marshall Wells and Earl at the Modern Press.  All of her wages went to the Saskatoon Credit Union.  The bank agreed to pay all of the construction bills at the end of each month.  This mortgage arrangement was very flexible and it allowed them to start building immediately.  The Saskatoon Credit Union sure was good to us.

They moved into the basement on September 1950. By spring 1951 Earl was finishing the main floor.  Plumbing and electrical was contracted out and completed in 1952.  We moved upstairs fall 1952.

Our first child Lynda Lee was born Dec 9,1952 and son Lorne in Oct 8, 1954.  Our neighbors soon became friends because our children all played together.  These neighbors included Kay and Ben Knapp and their daughter Lorraine, Betty and Al Earle and their children Jim and Trudy.  Charlie Merle and Ken Forsythe and Corona and Bob Carmichael were also close as Ken, Bob and Earl enjoyed curling together.  Our new neighbors were just like family.  We were very happy there but in 1959 two Montgomery friends helped Doreen persuade Earl that a move would be a good thing.  With two children and Doreen’s Mom living with them they could use a larger home.

When Earl and Doreen Braithwaite went to the Department of Veterans Affairs in 1959, they got one of the last available lots in Montgomery Place. Over Earl’s protests, they chose a corner lot.  He knew there would be lots of grass to mow.  The family of four plus Doreen’s mother moved into their new home at 3401 Ortona Street on January 1960. Over the years two more children completed the family.

Lynda, Lorne, Laura and Lorraine Braithwaite grew up in Montgomery Place, attending Montgomery School and Mount Royal Collegiate. Like other Montgomery kids growing up in the 1960s, they walked and biked, skated and played outdoors with friends. They liked to run downstairs to spend time with Grandma.  She always had cookies and other treats to enjoy while playing cards or watching TV.

“I didn’t do Home & School. I wasn’t a joiner” Doreen recalled. “I loved to play bridge and played in a 12-woman club for many years. That many players meant we were practically sitting on top of each other when we got together to play,” Doreen remembered with a smile.

Doreen loved the sun and every summer would end up tanned and healthy. The large garden, however was Earl’s domain. She canned and froze garden produce to enjoy throughout the winter. Doreen cooked and baked, sharing recipes with her many friends. A favourite recipe was Bernice Peter’s Waldorf Salad which Doreen served as a dessert at Christmas.

The Braithwaite’s were members of Trinity United Church. “All of our babies were baptized in the same gown, so now I have trouble identifying who is in the photos,” Doreen laughed.  She recalls meetings around their kitchen table as plans were made to build the church that opened on Rockingham Avenue in 1963.

She also remembers the turmoil leading up to the move of the train station from downtown Saskatoon to the Chappell Yards in 1964. After the CN Curling Club moved to Chappell Drive in 1965, she tried curling but didn’t like the cold.  Earl however, loved to curl and spend time with his Montgomery Place friends. The couple also square danced with friends from the neighbourhood. As a young married couple they often walked, biked or took the bus.  They purchased their first car, an old Dodge in 1954.  By 1972 they bought a new Pontiac automobile which allowed even more travel.  Trips to Vancouver, Las Vegas and Los Angeles followed.  Holidays overseas included travel to Britain, Austria, Germany and New Zealand.

Due to Earl’s health they moved from Montgomery to Villa Royal suites in 2005.  When the doctor told Doreen “Earl needs more care” then she found a place for Earl at Oliver Lodge.  Doreen soon moved into Oliver Place so she could live closer to Earl and daily visits ensued.  Doreen often volunteered  in the day programs and visit with other patients.   Earl passed in 2017 at the age of 92.  Doreen’s fondest memory of Montgomery Place is undoubtedly the group of friends she made there. Many names bring a smile to her face. She attended the Montgomery Place 70th anniversary festivities in 2016.  The family has decided to have a private ceremony to celebrate Doreen’s life.  Those wishing to send their sympathies can mail them to :