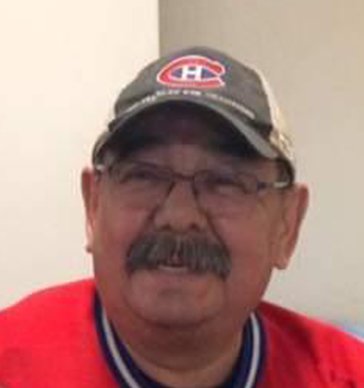 Dale was born in Prince Albert, he started working in the bush with his dad at the age of 16. He moved to Saskatoon in 1985 and started working with the City of Saskatoon Parks division as a seasonal worker for the past 34 years; Dale off season worked at Dakota Dunes Casino, and than at Creeway West Petro Canada, until his arthritis forced him to quit.
Later in 1985 he met Sharon Black who stole his heart and soul.  In May 2000, Dale and Sharon married, they have 3 children Tyrell, Nathan and Beatrice.  He was blessed with 3 granddaughters Mikka, Caidence, Cassia.  Later on adopted Kristi and her son Blairski; who Dale loved him as a grandson.
He had a special place in his heart for his “poor little Rea’, along with Magrew, DoDo, Kristi and Dustin.
Dale was faithful to Glen Mary Church, he made every effort to get out to all the graveyard cleanings and services.
Dale loved the Montreal Canadians team, he loved playing cards his partner was always Neil, and he always thought he was the winning team.  Dale and Sharon played several games of Yatzee into the wee hours of the night.  Dale & Sharon travelled frequently to Frank & Janets for darts & hoots, along  with Angie & Rob, with their usual stop on the way out of town at Kings.
Dale was a friendly, loving, caring man, always showing respect and kindness to everyone he came across.  He had many friends and acquaintances from the casino, gas station and city workers.  Dale loved to laugh & tease; he had a laugh no one will forget.  Somewhere along the line Dale gained the nickname Garcia or Garc.
Dale loved his family dearly and always made sure they were looked after and that was his only worry about passing to make sure Sharon was looked after.  Dale totally fulfilled his marriage vows, until death do us part.
Dale will be greatly missed by all that knew him, Rest in Peace!

Share Your Memory of
Irvin
Upload Your Memory View All Memories
Be the first to upload a memory!
Share A Memory