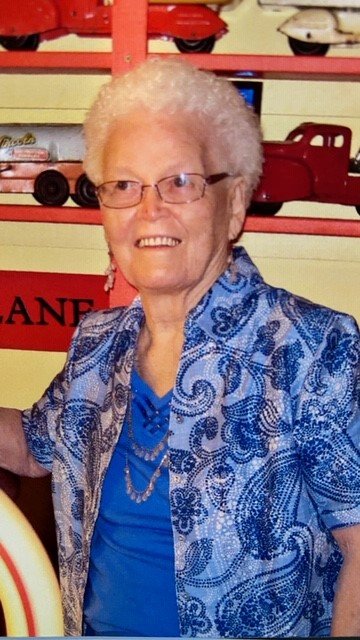 Georgina Isley passed away peacefully at St. Paul’s Hospital on Sunday, July 5, 2020. Georgina was born in Saskatoon, SK at City Hospital to Margaret and George Brown and lived on her grandfather’s farm north of Harris and went to Silver Cloud School. Her parents bought a farm north of Zealandia in 1942 and she went to Dollybrae School to finish her education. She married George Isley on September 14, 1947 and they lived on his farm north of Zealandia where they started their family. In 1959 they moved to an acreage on the south side of Harris where they finished raising their children and enjoyed their many farm animals. She was involved in Home and School and taught Sunday School. In 1989 George passed away and Georgina relocated to Saskatoon where she lived at Jubilee Residence and later at Oliver Place. Georgina is survived by her three children, Elaine Herout, Ron (Karen) Isley and Betty (Raymond) Dollansky. She is also survived by seven grandchildren and great-grandchildren, Jennifer (Derrick, Connor, Keagan), Gordon (Veronica, Dylan, Lauryn), Kenneth, Heather (Ken), Brenda (Jon, Erin, Heidi, Emett), Robert (Shauna, Cam, Kennedy, Jillian) and Neil (Allison, Colby,  Barret). She is also survived by her 2 sisters, Sarah and Gladys (Jack). She is predeceased by Her husband George, son-in-law William Herout, brothers Gordon, Barney and Robert.  Georgina will be laid to rest beside her husband George at a private family graveside service at Woodlawn Cemetery. For those so wishing memorial donations may be made to St. Paul’s Hospital Palliative Care Unit care of the St. Paul’s Hospital Foundation.

Share Your Memory of
Georgina
Upload Your Memory View All Memories
Be the first to upload a memory!
Share A Memory