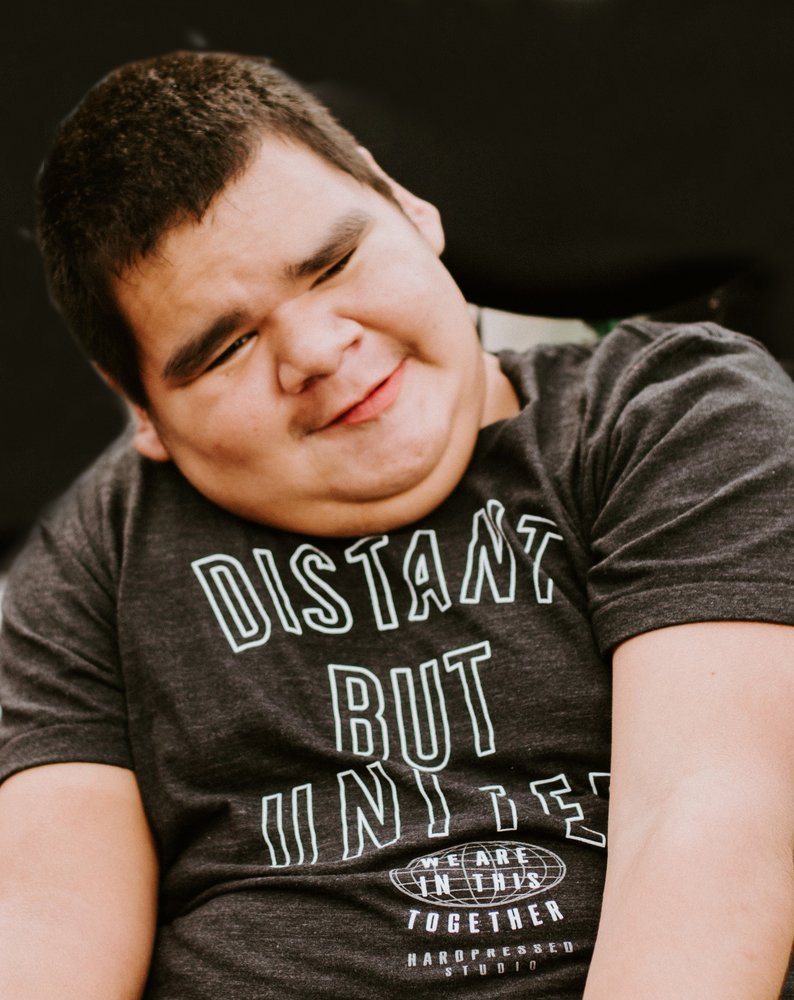 Watch the recording of this service at https://video.ibm.com/embed/recorded/128504294

Kanye was born in Saskatoon to Dayna Okanee and Clifton Ben on February 2, 2005 and was a happy, smiley baby. Kanye lived in the loving home of the Alcera family from the age of 14 months – 12 years old before joining his Hope’s Home family. Kanye was generally a quiet boy with a gentle soul, a welcoming smile that would make your day. He would even express love by showing who he felt comfortable enough to fall asleep near because he trusted he’d be cared for. In July of 2017 Kanye moved just down the street into Hope’s Home. Kanye was a perfect fit at Hope’s Home and was quick to create special bonds with everyone there. Although he was moved from the Alcera’s home, they were used to seeing him in the neighborhood on a regular basis especially in the summertime at the park or when going for a walk. Although Kanye could not do many things other people can, he was able to express his love with a look, with a smile and with a squeeze. A nurse at Hope’s Home fondly remembers walking into Kanye’s room at night, thinking he was sound asleep. She would often feel a squeeze on her leg from him – keeping her on her toes – and to let her know he was not asleep and was there to tease.

Kanye attended John Dolan School in Saskatoon from 2008 until a week before he passed. He developed many more lifelong friendships with his schoolmates and teachers, support staff and nurses. Kanye enjoyed his many community outings and activities including dance classes, hockey and basketball games, bowling, and Camp Easter Seal. Kanye loved being outdoors and spent many summer days soaking in the sunshine on the ground in the backyard and going for long neighborhood walks in the community.

A sweat was held on Sunday, November 10th, 2019 and Kanye was given his Indian Name – Pinon Pisaw. This translates to Winter Thunderbird. A representative from Thunderchild First Nation presented tobacco and honorarium to the Elder on Kanye’s behalf. Kanye was the well deserving recipient of the Hope’s Home Child of the Year Award in 2019. He was nominated as an inspirational child demonstrating the true meaning of courage and resilience. Kanye faced many health challenges in his life with grace and dignity.

Hope’s Home would like to send appreciation and thanks for the exceptional care Kanye received over the years from Dr. Huntsmen and Dr.Hodgson-Viden. To all the nurses and teams on the Pediatric unit, the therapy team at KCC and lastly to Dr. Givilican and Dr. Hansen and teams for your compassionate care in the PICU.

We will greatly miss Kanye especially his smile and his contagious laugh. Though he is no longer with us, his memories will live in our hearts eternally. We love and miss you Kanye. May you rest in peace.

Share Your Memory of
Kanye
Upload Your Memory View All Memories
Be the first to upload a memory!