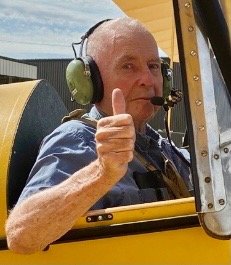 Guy Devenny, an honoured member of the Saskatchewan Aviation Hall of Fame, flew west on his final flight on June 1, 2021.

Guy was born in Weyburn on September 21, 1928.  After schooling, Guy worked for the Canadian Pacific Railway before joining SaskTel in 1946. He retired from SaskTel in 1981 as the Manager of Construction for Northern Saskatchewan.

Guy is survived by his wonderful wife of 70 years, Leona (nee Geiss). After spending their early years together in Moose Jaw, Guy and Leona moved to Saskatoon in 1961.  They remained in Saskatoon, where they raised their two sons, Jim (Renee) Devenny and Gord (Barb) Devenny, enjoying summer family camping holidays coast to coast in their tent trailer, and watching the boys play baseball.

In the early 1970’s Guy became involved in aviation. Hanging out at the airport with their Dad inspired Jim and Gord to begin their own careers in aviation, of which Guy was very proud.

Guy is also survived by his six grandchildren (Ashleigh, Brynden, Dawn, Catherine, Michael, Patricia) and fourteen great-grandchildren.  Guy passed his love of aviation down to his grandchildren, and enjoyed visits and storytelling with them over the years.  He was always excited to have his grandkids and great-grandkids come visit and to take them on hangar and museum tours, or if they were really lucky, maybe even an airplane ride.

Guy spent many years bush flying in the north in his second career. A few years ago he was the only person in the retirement home flying a Turbo Otter on floats

.
Guy became an instructor at Mitchinsons Flying Service and trained many pilots who went on to international flying careers. During his career he was an instructor, a mentor, father figure, chauffeur,  banker, and marriage counsellor to countless aspiring young pilots. He maintained contact with many of his students and was very proud of all of them in their careers. Guy was especially close with four of his students, Dale Tiedeman, Darren Malcolm, Jason Bews, and his good friend Jim Guenther. Thank you all for your long term friendship.

Guy was very appreciative of the time he got to spend with the Glass Family at Athabasca, with Janet Keim and the Mitchinson gang, as  well as volunteering at the Saskatchewan Aviation Museum with Dorrin Wallace and friends. Up until last fall Guy worked as the Hangar Rat for Andrew Babey.  If the hangar was to open at 0800, Guy would plan to be there at 0700, then get up to be there by 0630, but would always be there by 0600 with coffee on.  Guy truly enjoyed his Sunday morning hangar coffee buddies as well.

Not bad for a guy that only finished grade eight.

Sincere thanks to Lisa and the staff at Luther Special Care - you are fantastic and we appreciate all that you have done for Guy.

No service will be held at this time, however when the world returns to normal, a good ol' hangar party celebration will occur in honour of Dad.

Share Your Memory of
Guy
Upload Your Memory View All Memories
Be the first to upload a memory!
Share A Memory