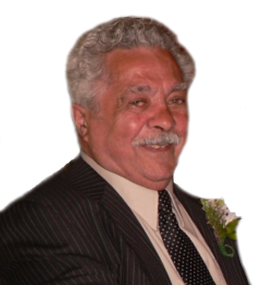 To Watch the recording of the Service click this link
https://video.ibm.com/embed/recorded/130711463

Sam was born in the town of Pietrapertosa, Italy located on the rugged slopes of the Dolomiti Lucane mountain range.

The seventh and last child born to Michael and Catarina Eufemia, Sam’s childhood consisted of tending to his families land of vegetable gardens, olives groves, orchards and vineyards.  It was on the family acreage that Sam’s father taught him the art of farming various crops, raising animals, and winemaking.  These were all skills that Sam used and enjoyed his entire life and they remained his favorite hobbies until his very last days.

In 1961, Sam decided to follow his older siblings and immigrate to Canada.  With five Canadian dollars in his pocket, he boarded the Italian ocean liner the MS Vulcania and made the seven day voyage to Canada. Only able to afford a 3rd Class ticket on the ships lowest deck, his cabin window provided a view of the cresting waves.  Often sea-sick on the journey, Sam finally reached Halifax by ship, and then to Montreal where he took a train West to Saskatchewan.  Stepping off the train in Saskatoon, one cannot picture a greater contrast than the flat and unending plains of Saskatchewan, to the peaks and valleys of Southern Italy`s mountains.  We can only imagine what Sam must have thought in this new place he now called home.

Speaking no English, Sam first worked in the kitchen at the Bessborough Hotel.  After turning down an opportunity to become a jockey, Sam took a job as a mason and concrete worker and was later part of the crew that built the Idylwyld Bridge.  Sam was always proud to tell the story that he was the first person to drive across the bridge after it was completed.

In 1968 Sam welcomed Bruna Scalegno to Canada.  Bruna was a beautiful girl from Sam`s hometown and the two were married on June 1, 1968.  Cathy, Mike and Joe were born to Sam and Bruna in the next few years with Sam Junior following a decade later.

Sam was a hard worker and an honest man.  He worked in the trades his entire life and provided well for his family.  He rarely asked anything of anyone and was always willing to lend a helping hand to anyone in need.  Sam had a generous nature and was eager to share what he had with his family and friends.  Whether his generosity came in the form of a bottle of wine, a wonderful meal or a gift, Sam always took good care of those he loved.

Sam was proud of his Italian roots and he and Bruna enjoyed a vibrant social life with their many family and friends in the Italian community over the years in Saskatoon.  Sam loved the simple things in life, like a fresh tomato or hot pepper from his garden or a game of Scopa with his grandchildren.

Most of all, Sam loved his family and wanted nothing more in life than to enjoy a meal and a visit with his children and grandchildren.  Known and loved as `Papanon`, Sam`s greatest treasure was his eight grandchildren who he loved dearly.  Nothing brought Sam greater joy than knowing that his grandchildren were happy and healthy.

Papanon was truly one-of-a-kind and he can never be replaced or forgotten.  He is etched into each one of us.  We will always remember his proud smile while wearing his signature white undershirt and tending to his garden.

Left to cherish Sam`s life and memory is his loving and faithful wife Bruna of 53 years,

Son Sam Junior of Saskatoon and grandchildren Emma and Vincent,

Sister Maria (Rocco) of Saskatoon and many nieces & nephews.

To each of you that shared a friendship with Sam, he loved and appreciated each one of you.  May God bless everyone that Sam called friend.

With Love and Sincerity,

Share Your Memory of
Sam
Upload Your Memory View All Memories
Be the first to upload a memory!
Share A Memory