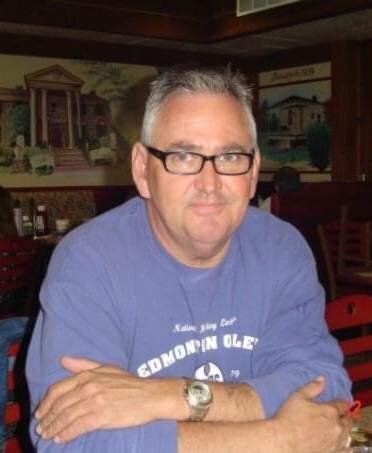 To Watch the recording of this service click this link

The family of Randy St. Denis are saddened to announce his sudden but peaceful passing on June 18, 2022.  Randy was born into a loving family on March 10, 1956 to parents Ted and Betty St. Denis.  He was the third of six children.

Randy spent his formative years living on Saskatoon’s west side and at the family cabin at Emma Lake where he gained his love of fishing and the outdoors. He also had a passion for motorcycles and loved getting out on his bike with his friends, better known as “the prairie dogs”. He went on bike trips all over; including Sturgis bike week, Daytona bike week, and a drive through the Florida Keys.

Randy spent most of his working career at the City of Saskatoon and was so proud to get his “gold watch”.  While he worked for the City, Randy was very active in his union, CUPE Local 59.  He held a number of executive positions and was also a Diversity Vice President on the CUPE National Executive Board.  Randy left his employment at the City of Saskatoon when he relocated to Prince Albert.  While living in Prince Albert, Randy worked as a Labour Relations Officer for SGEU.  He was proud to have negotiated the first statutory holiday in the province for National Aboriginal Day.

In 1992, Randy became a friend of Bill W and that program shaped his life in a positive way.  He made numerous friendships and helped many people to find their way to the program.

In 2013, Randy suffered a debilitating stroke and spent his remaining years at the Saskatoon Convalescent Home.  The family is grateful for the excellent care and support he received from the staff.

Randy will be lovingly remembered and forever missed by:  his three children - Joseph (Denis Lacasse), Ronald (Leah Johnson), and Jaclyn (Eric Klev); his sisters:  Jackie (Vince) Sorowski, Gail Cathcart, Diane St. Denis, and Betty (Brian) Gibson; his sister-in-law Christine St. Denis; numerous nieces and nephews; and all those whose lives he touched.  He was predeceased by his parents, his brother Ted St. Denis, his brothers in law Lloyd Cathcart and Kurt Straker, and nephew Chad Sorowski.

A Celebration of Randy’s life will be held on Friday, June 24th at 11:00 am at Westwood Funeral Chapel, 1402 20th St. West. In lieu of flowers, donations would be gratefully accepted by the Heart and Stroke Foundation.

For those wishing to watch the service on livestream, the link will be activated here on Randy’s obituary page just prior to the service.

Share Your Memory of
Randall
Upload Your Memory View All Memories
Be the first to upload a memory!
Share A Memory