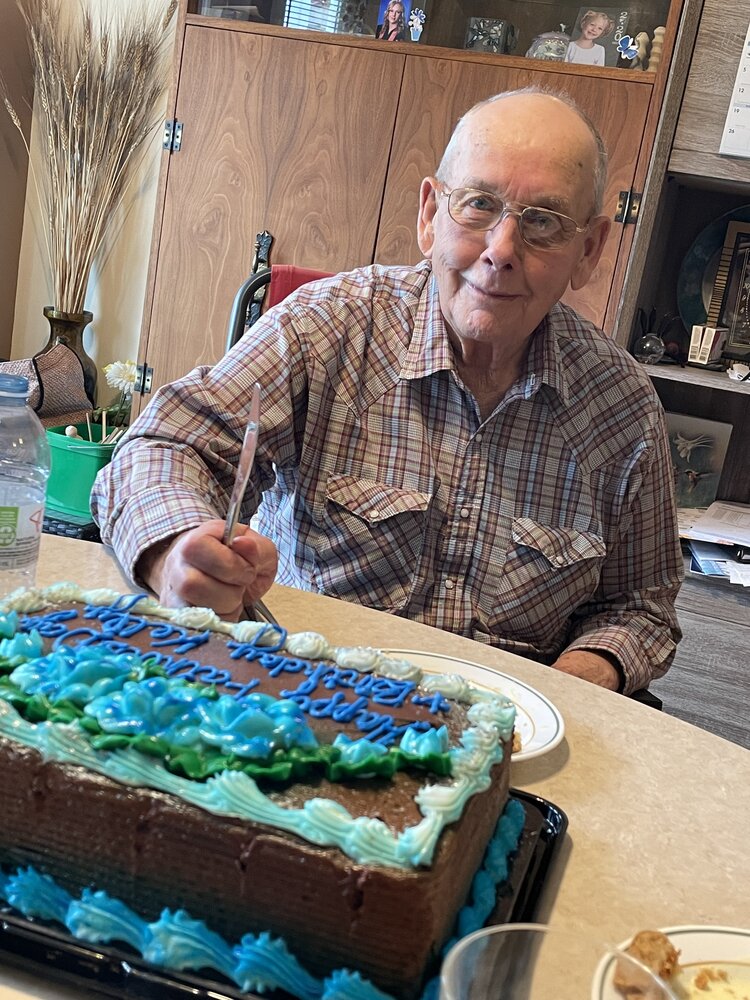 Kelly was born on his Grandfathers Farm in the Shannonville area. He was the only son of Hugh and Freda Dunlop and lived along with his three sisters, Betty, Anne and Kathleen, on the Family Farm. He took his Schooling at the Shannonville School, and later high school in Kinistino. He remained on the farm for the better part of his life. He married Muriel Gaston in 1956 and raised his four children, Charlene, Patty, Gerry and Tana.

Farm life was his life. He took in so many activities in the communities of Weldon and Birch hills as that is where his kids attended school. His love of curling, dances, neighbor visiting, and was a member of the Elks Club in Weldon for many years. Family outings were important so he took a week off every summer to explore lakes in the north with Grandpa Dunlops Camper and Boat.  We were always drawn to Whelan Bay and in later years purchased a cabin there.
In later years, on the farm Kelly and Muriel spent their winters in Yuma Arizona where they were in touch with their Sask Neighbors and made many more friends. That is when he traded his curling boots to Golf Shoes.  He would golf quite a bit in Yuma and in Canada. He had a little trailer at Shannon Lake to do some fishing without having to travel too far.

They retired from the farm when Muriel was battling Cancer and bought a house in Melfort. There he looked after Muriel up to her death in 2016.
The final years in Melfort, He had his two little shops in the back yard, gardening boxes, making things to keep him occupied.

He enjoyed visits from everybody and forced them all to have ice Cream and Pie as they were on sale. He had his Timmies coffee row which he enjoyed very much. Good Fellowship.

Kelly leaves to Mourn His Daughters, Patty and Cliff Jessup, Charlene and Dennis Frank. His Sisters, Kathy Taylor and Betty and Gerald Gephardt.  His Grand Children, Robert Reid (His children Jorden and Kaleb), Leslie Grezsiuk (Her children Daniel and Danica), Tyler and Lindsey Wozniak (their children Troy, Pearce and Daelyn) Mureca May, Melina and Cole Anderson, Mikeah May and Jay
Nieces and nephews
Bonnie, Deb, And Laurie, Darcy and Kelly, Melody and Marlo
Kelly was preceded by: His Wife Muriel Dunlop, His parents Hugh and Freda Dunlop, His son Gerald James Dunlop, His Daughter and son in law Tana & Ralph May, His Sister and brother in law Anne and Henry Pederson, His Brother in law Terry Taylor, Nephew Terry Pederson.

Share Your Memory of
James
Upload Your Memory View All Memories
Be the first to upload a memory!
Share A Memory